Louisiana’s No Pay, No Play Statute →

What if the At-Fault Driver Did Not Have Auto Accident Insurance? →

Arguments For and Against No Pay, No Play →

No Pay, No Play Laws Nationally →

States with No Pay, No Play Laws → 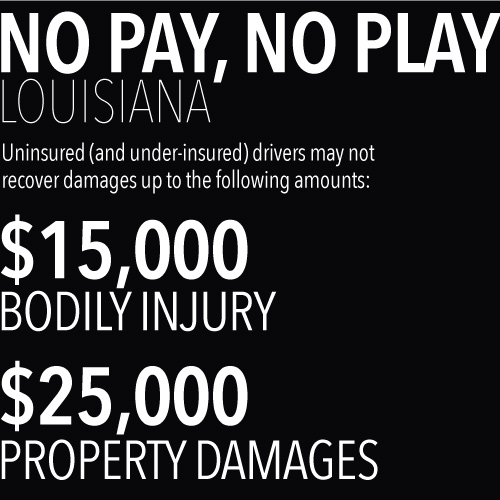 IMPORTANT – PLEASE NOTE: If you have been involved in an auto accident in Louisiana and suffered only property damage, minor injuries, or no injuries at all, and did not have car insurance at the time of the wreck, our New Orleans car accident lawyer will be unable to help you pursue a claim unless you qualify for one of the “No-Pay, No-Play” law’s exceptions (see below).

In Louisiana, the “No-Pay, No Play” law prevents uninsured and under-insured drivers from collecting the first $15,000 of bodily injury damages and the first $25,000 of property damages. This means that even if the other driver is at fault, an uninsured driver will have to cover medical costs up to $15,000, and car damage repairs up to $25,000.

Are There Exceptions to the Louisiana “No-Pay, No-Play” Law?

Yes. If you’ve been injured in a car accident, Louisiana’s “No Pay, No Play” law has multiple exceptions you should be aware of:

If you believe you qualify for one of the exceptions to the Louisiana No-Pay, No Play law, be sure to contact an experienced auto accident injury lawyer to review your case; and be sure to avoid common mistakes following a car accident in New Orleans that can harm your claim. Additionally, review what to do after you’ve been in a car accident, so you can avoid costly mistakes. The statute which passed in 2011 reads, in part:

“I was hesitant to speak with an attorney because of my “No Pay, No Play” situation. I needed help fixing my car. Keith went above and beyond to satisfy my claim. Keith kept his word, and his staff was very friendly, caring and treated me as family. I’m so happy I chose [Keith and his team] and will refer [them] to everyone.”

What If the At-Fault Driver Does Not Have Auto Accident Insurance?

Louisiana is the second most expensive state for auto insurance – partly because of its high number of uninsured drivers. In an effort to reduce insurance premiums for its consumers, among other initiatives, the state legislature passed Act 1476, known as the Omnibus Premium Reduction Act, in 1997. One section of this complex law was the “No-Pay, No-Play” provision, enacted to penalize uninsured and underinsured drivers, while encouraging them to purchase adequate levels of insurance.

Arguments For And Against the No Pay, No Play Statute in Louisiana

Opponents of No-Pay, No-Play contend that the reason that uninsured drivers don’t have insurance is because they can’t afford it, and the law simply punishes people who are already in a difficult financial situation.

However, proponents of the law believe it is necessary, in the name of fairness: uninsured drivers shouldn’t be rewarded by a system they have neglected to pay into. Nor should they be able to benefit from law-abiding drivers’ insurance, while denying that same privilege to any drivers they themselves happen to hit.

No Pay, No Play Laws Nationally

According to the Insurance Research Council (IRC), roughly 14 percent of all motorists in the U.S. are uninsured – that’s nearly one out of every seven drivers. States with a high number of uninsured drivers also tend to have higher insurance costs. That is because accidents caused by uninsured drivers cause insurance companies to lose money.

States with No Pay, No Play Laws

As of this writing, there are currently 10 states have some version of a “no-pay, no-play” statute or law:

Unlike Louisiana many states with No-pay, No-play limitations on car insurance claims (and lawsuits) are only on non-economic damages. This would include items such as pain and suffering, mental anguish, and loss of companionship. Economic damages, the uninsured motorist’s actual medical bills, and property damage, are typically still recoverable in these jurisdictions.

Louisiana is the only state whose law specifically enumerates “No-pay, No-play deductible amounts,” which are equal to the state-required minimum bodily injury and property damage liability coverages for motorists.

For questions about a car accident in the New Orleans area, contact the experienced team at the Law Office of Keith L. Magness, LLC today at (504) 264-5587.